The RoNA Rose Award recognises the best in category/series and shorter romance that focus on a developing love affair between the hero and heroine.  The Award is presented by the Romantic Novelists' Association. 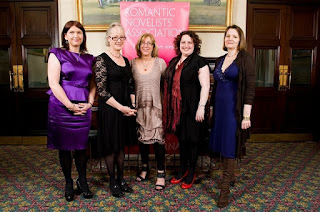 Update:
Here we are at the Awards, and the winner was Sarah Mallory! (in the middle of the photo.)

We had a lovely day, Mills & Boon took us out to lunch beforehand, and then there was a glittering reception at the RAF Club when the Awards were announced. It was wonderful to be part of it!

Congratulations to everyone on the list!   I am thrilled Betrothed to the Barbarian is included.   It's  the final novel in a trilogy set in eleventh century Byzantium.  Read more about this novel here.

Posted by Carol Townend at 03:50 No comments: Links to this post

The royal chambers in Dover Castle have been marvellously recreated to give a flavour of what life might have been like for a privileged few in the twelfth century.  Below are some pictures from our visit in the summer.  Some of the scenes in the Knights of Champagne could have taken place in rooms like these.

Colours are dazzlingly bright, even garish, and the overall impression is one of luxury.   These are apartments which were designed to impress.  There were virtually no private spaces, the King would carry on some of the business of government even when in his bedchamber! 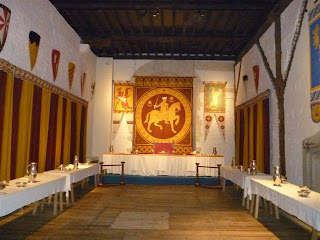 This chamber has been laid out as though ready for a twelfth century banquet.  Note the knights' shields above the wall-hangings, and the larger tapestry at the end. 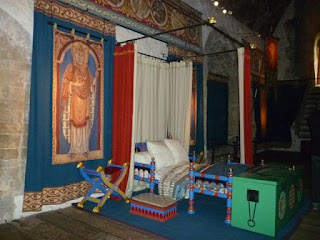 Here's a glimpse into the king's bedchamber.  Wall-hangings, murals and furniture are brightly painted.  As the bedchamber is so large, the curtains around the bed would have been necessary to stop draughts, as well as ensure a small measure of privacy. 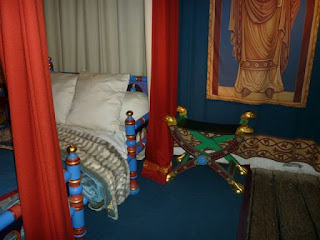 The cross-framed camping stool next to the bed is similar to one in the medieval palace in the Tower of London.  It's a reminder of the peripatetic nature of court life.  To ensure the smooth running of his government, the king and his courtiers were constantly on the move. 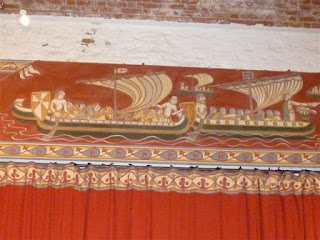 The ships on this mural are reminiscent of those on the Bayeux Tapestry.... 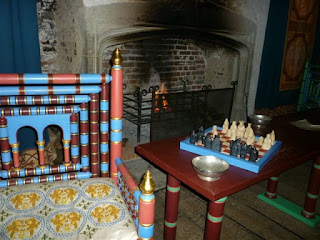 Here's a dazzlingly painted spindle chair, with a nearby chess set laid out for the next game...


(I know the lighthouse isn't strictly speaking part of the medieval reconstruction, but I love the idea of a lighthouse going so far back in time...)
For more about Dover Castle see here.

Posted by Carol Townend at 08:28 No comments: Links to this post