It's vacation season and excitement mounts as that long-awaited time at the beach approaches. To add to your anticipation, some Harlequin Historical authors are offering a bevy of prizes to fill your beach bag with fun items (and BOOKS of course!) for that relaxation time.

Each participating author will have an activity planned on their website for their special day. You may be asked to comment on a blog, do a scavenger hunt, or visit a Facebook page. For each day you participate, your name will be entered into the Grand Prize drawing.

At the end of the month on June 29, one day from the calendar will be randomly selected. One of the entrants from that day will then be randomly selected to win the grand prize of a Kindle Fire (or whichever equivalent product is available in your region).

The more days you visit, the better your chances!

We look forward to seeing you.

Posted by Carol Townend at 00:59 No comments: Links to this post

This book is the third novel in a Byzantine Trilogy set in eleventh century Constantinople. It was shortlisted for the RoNA Rose Award 2013!

Full details of the Award can be found here.

Princess Theodora of Constantinople is to marry Duke Nikolaos, the general-in-chief of the army, a man chosen for her by the Emperor.  An imperial princess must always do her duty - be beautiful, obedient and pure.

But Theodora spent ten years in exile in a barbarian land.  There, once, she might have forgotten protocol.  Forgotten enough to have given birth to a baby in secret.   As her wedding night approaches, Theodora finds she wants to share her bed with the Duke, except she knows she's on the verge of revealing her biggest sin...

And for a review, please click on the following link: Goodreads

And here is another on: Goodreads review 2

Posted by Carol Townend at 13:36 No comments: Links to this post 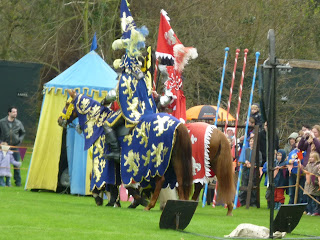 These knight were photgraphed at Hedingham Castle.    They are the Knights of Arkely.
Tournaments were war-games, designed to give knights practise for actual war.  Some tournaments were friendly, and knights jousted with blunted lances, etc.   Others were not so friendly, and men would be killed.   In the twelfth century King Henry II banned tournaments in England, but he did not ban them on his Continental domains.   King Louis of France also discouraged tournaments.    That did not prevent them from taking place. Each tournament followed a similar pattern.   At the beginning of a tournament, the knights would enter the lists.  Above, you can see the pavilion 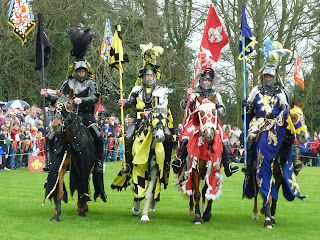 in which some of knights' equipment is kept.  The lance stands are to the right of the pavilion.
Above, the knights ride round the field at the review. Preliminary jousts were known as the 'vespers'.  In the vespers men who had been recently knighted were given a chance to practise (and test each other's mettle).  The picture below is blurry, but small targets were laid out on the ground.   This knight has successfully speared his target. 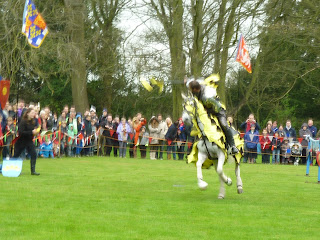 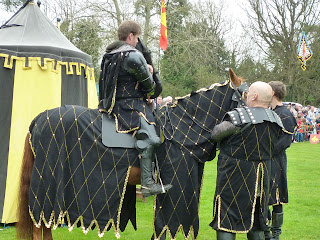 The Black Knight watches, discussing tactics with his squires.
There would be a chance for individual jousting between knights.  Action was astonishing fast, the field at Hedingham isn't large and the horses (and knights) were very agile.  The horses seemed to be able to leap straight into a gallop.  They could turn on a sixpence and come to a shuddering halt equally quickly.  The word 'tournament' comes from the word 'tourney' which relates to an old French word for 'turn quickly'. 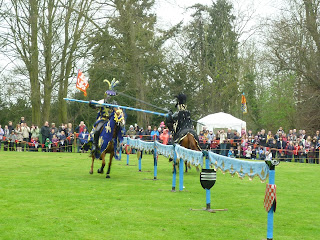 After the individual jousting, competitors usually formed two teams and lined up for the charge.   The herald gave the signal and two opposing teams would thunder across the lists and begin to fight.   This rapidly turned into the most dangerous part of a tournament - the melee.    In essence, this was a running battle.   Sometimes the battles would spill out away from the lists.   Knights would capture each other, and ransoms would have to be paid by the captured knight.    There would be prizes.  And, no doubt, feasting! 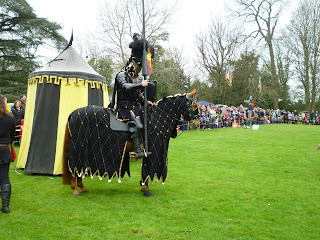 Below is a view looking down over the lists at Carcassonne in France.  Military skills would be practised here... 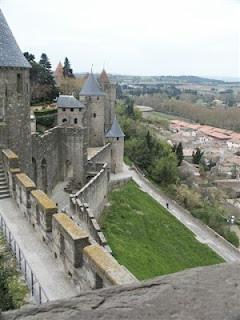 Posted by Carol Townend at 03:21 2 comments: Links to this post