And the Grand Prize-winner is...

Congratulations to Melissa from Texas who is the Grand Prize Winner of a Kindle Fire!

Our thanks to everyone who participated in our second Harlequin Historical Authors Holiday Giveaway. It was a terrific way for us to enter in to the Holiday Spirit!
Posted by Carol Townend at 09:13 No comments: Links to this post

My Competition is Closed...

The answer to the question was Katerina and there were 211 correct entries.

Congratulations to the three winners!    The winners were randomly selected and I have emailed them to let them know.   They are:

My thanks are due to everyone who took part!

In the meantime, the fun isn't over because today is Julia Justiss's day on the calendar.   Either click on the image of the Holiday Calendar on the right to reach her site...or try one of the links below...

It's December 12th, and my giveaway opens at 9 am, UK time!  It closes on Wednesday, December 14th at 9 am, UK time, so you have until then to enter.   To be eligible there is one simple question to answer.  I would also love it if you could 'Like' my new Facebook Author Page, but you don't have to do that to enter.    The Facebook 'Like' button is on the right hand side of this blog.

Competition entries should go into 'Comments' below this post.  Please include your email address, particularly if you are posting as 'Anon'!  For your security, I will not publish your entry.

To enter please answer this simple question:
What is the first name of the heroine in Bound to the Barbarian, the first in the Palace Brides trilogy?  (Don't forget to include your email address with your answer, so I can contact you, if you are a winner!)  The winner and the two runners-up will be chosen randomly.

For a large part of Bound to the Barbarian, the heroine has  to pretend to be someone else.   She is a medieval heroine, of course, but that doesn't stop her using cosmetics to hide behind. 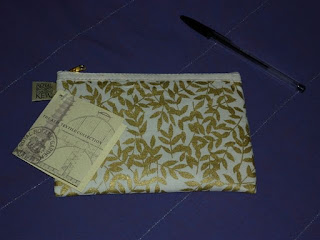 My main prize is therefore the small cosmetic bag above (the pen is there to show the scale!) plus two paperbacks from my backlist (provided I still have copies).   Additionally, two runners-up will be sent one paperback from my back-list.

Grand Prize?   If my day is chosen for the Grand Prize Draw, all correct entries will automatically be eligible to win the Kindle/Kindle Fire. For full rules, please click on the small calendar on the right hand side of this page.
Posted by Carol Townend at 00:39 11 comments: Links to this post

My day is on Monday 12th, and my competition will be open until Wednesday December 14th, 9 am UK time!   The first prize is a small cosmetic bag from Kew Gardens, and provided my stocks allow, the winner may also choose  two of my recent paperbacks.   Two runners up will also receive a paperback of their choice.

The competition doesn't end there though....there are daily prizes until December 22nd, and everyone who enters has a chance to win a Kindle/Kindle Fire - the actual prize depends on your location.    The small image of the Calendar on the right  takes you through to the rules, as does the button below.

(Version of a blog originally posted on eHarlequin).
On our recent trip to France, my long-suffering driver needed a break just as we were heading past Laon on our way south.     Medieval Laon is built on the top of a hill, and since there is a funicular that will take you to the top, we thought we would stop and try it out.
The medieval stonemasons who built Laon's Cathedral of Notre Dame were superb craftsmen.  Here is a  hippo gargoyle, after several centuries it is still realistic. 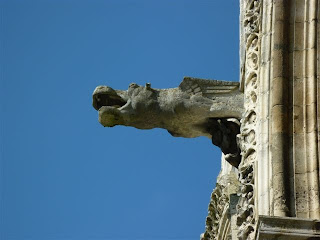 There has been a Bishop of Laon since the fifth century (Bishop Geneband), although the Cathedral wasn't built until much later, in the twelfth and thirteenth centuries.   I have already mentioned the hill.  The cathedral is at the top and legend has it that during the construction, a yoke of oxen were having difficulties getting a load of stone up the steep slope.  A mysterious ox appeared to help.  However, as soon as the wagon reached the top, this ox vanished.  The carved oxen at the top of this tower commemorate this miracle.  If you look closely you can see their horns are slightly whiter than the rest of the sculpture, which make me wonder if they might have been renovated recently.    The Cathedral at Laon lost a couple of towers in the Revolution (originally there were seven), but it remains a work of art. 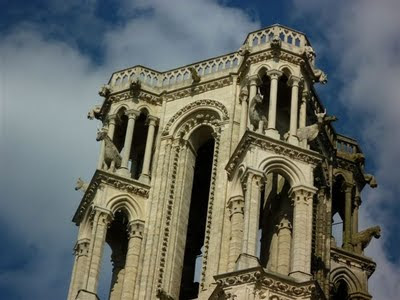 The figures below are standing by one of the Cathedral doorways.    I was particularly struck by the knightly figure on the right.  He has a halo, yet there is something very ruthless about him, there's a speared dragon at his feet.   Do you think he might be St George?  Or maybe he is St Michael and he has just overcome the Devil... 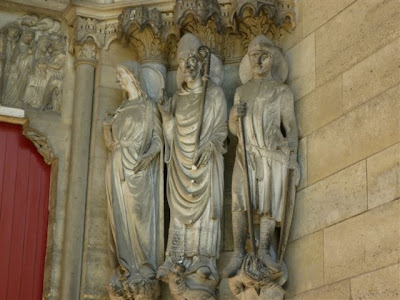 There are a couple more picture of Laon elsewhere on this blog, including one of the citadel taken from the funicular.  Here's one taken in the square, adjacent to the Cathedral.  I love the Romanesque arches. 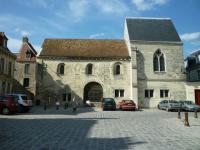 Posted by Carol Townend at 01:14 No comments: Links to this post