Like many medieval towns in France, Laon perches on a high outcrop. The car park was at the bottom and we chose to reach the main part of the old town the lazy way, we took the funicular. It was a little scary... 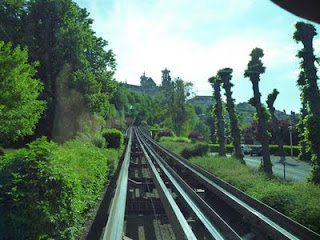 The next picture is of the Ardon Gate.    Tradition has it that it's the gate through which the great medieval warrior Roland is said to have ridden on his way to do battle at Roncevaux in 778.    He did so against the wishes of his uncle, Charlemagne, and had to flee the palace in secret. 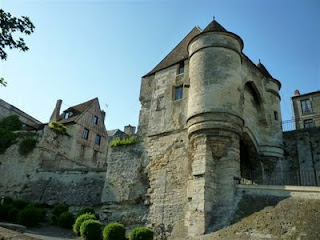 In this military age, the battle became something of a myth.  It was recorded in the eleventh century in the epic poem the Song of Roland.

Below the Ardon Gate is a spring-fed washhouse: 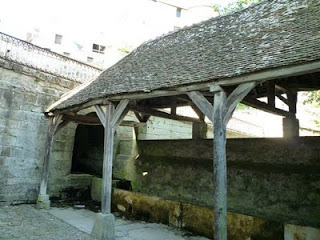 On the opposite side of Laon from the Ardon Gate, the view from the Saint Remy Rampart looks out over the forest of Samoussy.  It's the legendary location for the conception of Charlemagne by Pepin le Bref and Berthe au Grand Pied.    Medieval names are great, aren't they?   I wonder if it's fair to translate those names as Pepin the Short and Bertha Big Foot...
Posted by Carol Townend at 09:09 No comments: Links to this post

Recently, we spent 10 days in France.   I took hundreds of photos and will gradually post some of them here.  In the meantime, here is a peek into my husband's sketchbook.   (The poor man drove nearly 2,000 miles on this trip.)  Luckily he loves France, and likes to draw medieval buildings...

The first sketch is the gatehouse of the medieval ville bastide (fortified town) of Larressingle in the area of France know as the Gers.  It lies in the south.   The day we visited, swifts were screaming overhead and they have got into my husband's picture... 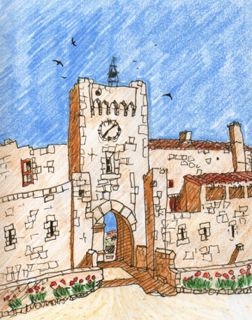 The second sketch was drawn in the Loire Valley, in the town of Beaugency.﻿  This little church, the church of St Etienne, was closed because of an exhibition.  Luckily we got a peek inside and could see the barrel vaulted roof.  It has clean, simple lines - very eleventh century. 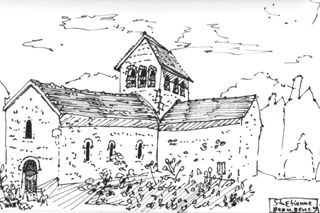 And finally here is his sketch of the later Chapel of Thibault, close to our hotel. 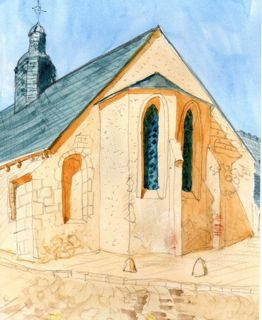 I shall try and write more about France later...am busy with the next novel at the moment!
Posted by Carol Townend at 06:57 2 comments: Links to this post

A Tudor use for Bluebells... 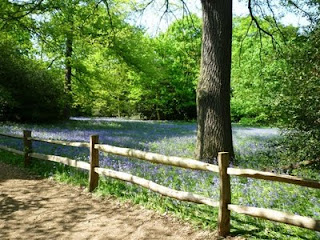 Here is this year's showing of bluebells behind Queen Charlotte's Cottage in Kew Gardens, where the wood is a haze of blue.     The bluebells have come out a little early this year, and by the time I write this, they may almost be over.   It has been a dry spring.   Looking up bluebells in my flower book, I found that bluebells are only native to the lands fringing the Atlantic, so they were unknown to early botanists in the Greek and Mediterranean world.    The bluebell is native to Britain, but it's not mentioned much in early herbals because of the early herbalists modelling their work on classical writings. 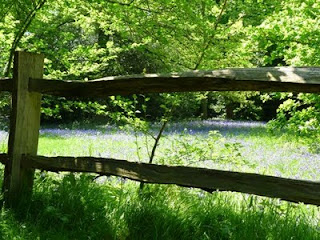 Historically, the bluebell is more than merely ornamental.  The bulb was used to make glue, and since the bulbs contain starch, they were used to help stiffen the ruffs of Elizabethans.
Tomorrow, technology permitting, I am blogging at the Harlequin Historical Author Blog speculating on what (other than bread) might have been cooked in a Tudor bread oven.
Posted by Carol Townend at 04:11 2 comments: Links to this post