The first of the Herevi Sagas. The new 2013 eBook edition is now available. 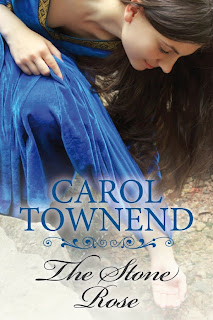 Cover Blurb
THE FIRST BOOK IN A PASSIONATE AND POIGNANT STORY OF A FAMILY FEUD IN TWELFTH CENTURY BRITTANY. WILL LOVE AND INNOCENCE TRIUMPH?

The illegitimate daughter of a knight and his concubine, Gwenn Herevi has all the innocence of youth. But she grows up quickly when a festering family feud erupts into violence, pitting her father against her uncle. At stake are the family lands in Brittany.

Into this scenario come Captain Alan le Bret and his cousin Ned Fletcher, mercenaries from England in the pay of Gwenn’s uncle. One woman, two men – passions run high as their lives become entangled and choices must be made.
A richly detailed evocation of living and loving in the twelfth century.


To read an excerpt, please click on the widget below:

Below is the cover of the original 1992 edition - publisher: Headline: 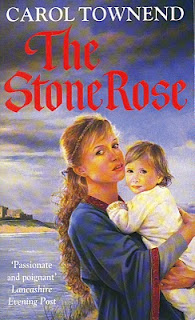 Life at Sir Jean's St Clair's Breton manor is peaceful enough until he finally marries his concubine, Yolande Herevi, and a legal heir is born.  Count Francois de Roncier cannot stomach this final insult from his mother's relatives, the Herevis - it seems he has not succeeded in removing the threat to his estate and lands by merely exiling them - and he determines that this time St Clair and his family will be shown no mercy.

Young, beautiful and no longer as naive as she once was, Gwenn Herevi escapes from a bloody massacre to find herself beholden to the two soldiers of fortune she once thought her worst enemies...And set on a course that will reveal the secret of the Stone Rose - her grandmother's mysterious madonna.

Her eyes were dark as sloes. They were inviting. He let her keep his hands and cautiously dipped his head so his mouth found hers. It was the first time they had kissed as lovers and it was very sweet. Her lips were warm. They trembled beneath his, and while she did not fling herself at him, she did not draw back either. Her eyes were huge watching him and something in them made his insides melt. And then because the sight of her was threatening to make him lose control, Alan shut his eyes, fought down a desire to snatch her into his arms, and made his mouth explore hers slowly.

‘Gripped until the end.’

Inspiration for one of the scenes in The Stone Rose came from the village of Shere which has had its fair share of saints and sinners.  The village stocks are sited outside the pub, and local miscreants might have been pelted with rotten eggs and old cabbages. 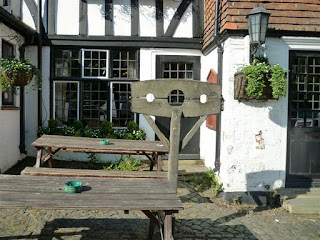 Unusually, in the case of the village of Shere, it's the saint who fascinates rather than the sinner... 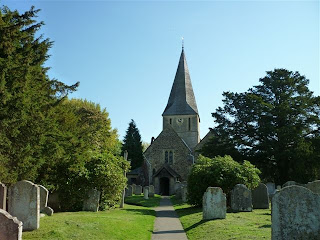 Shere Church, St James's, housed an achoress in the fourteenth century. Her name was Christine Carpenter. Christine was enclosed in a cell built into the wall of the church in 1329. She was actually bricked in! It's hard to believe that someone would be voluntarily enclosed in this way. (Christine wasn't literally a saint, later on in her life she broke out of the cell and had to be forcibly re-enclosed, poor woman.)


The picture below is the squint through which Christine would peer to watch Church services. 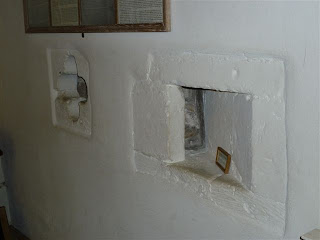 And this is the quatrefoil through which Christine received Holy Communion. 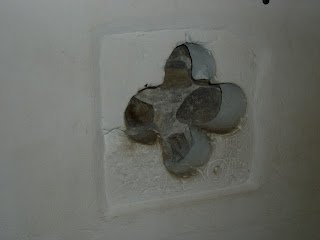 There was likely to have been an aperture in the outside wall of the Church through which Christine would have received her food and drink, though I very much doubt she would be able to see the fruit and vegetables growing in the villagers' field strips. She would have listened to pilgrims pleading for her to intercede for them, and she might perhaps have put in a plea or two of her own. She might have asked for apples, or plums, or bread baked from freshly ground wheat.   In one account Christine escaped her cell several times and in the end was allowed her freedom.  Learning about Christine Carpenter inspired one of the escape scenes in The Stone Rose.

Some places mentioned in The Stone Rose: