Blogging at Historical Romance UK today to celebrate the UK publication of His Captive Lady!
http://historicalromanceuk.blogspot.com:80/2009/03/guest-blogger-carol-townend.html
Posted by Carol Townend at 02:43 No comments: Links to this post

In Victorian times the life experience of most women was limited. For the respectable middle class lady there were basically two main career options: marry or become a governess. So when, in the mid 19th century, three sisters, daughters of an obscure Yorkshire parson, sat down and put pen to paper, it might be expected that since their lives were so restricted, their works would have small appeal. However, the exact opposite is the case. Each of the three sisters — Anne, Emily and Charlotte — found her own way of expressing her dissatisfaction with the world. They found themselves articulating the problems that assailed a whole generation of women. In that remote Haworth parsonage, their lives were so corseted by Victorian convention that, when the cauldrons of the imagination bubbled, a powerful head of steam built up and burst out into emotion-soaked novels that are still shaking the world today.

This article touches on three of their novels: Jane Eyre by Charlotte Bronte; Wuthering Heights by Emily Bronte; The Tenant of Wildfell Hall by Anne Brontë.

Emily Brontë’s imaginative powers were such that she was able to transmute familiar domestic details into vivid and revealing descriptive passages of intense significance. Look at these two contrasting descriptions of the house called Wuthering Heights. First Emily’s narrator Nelly Dean describes the house, readied for a visit from the neighbouring Lintons who live at Thrushcross Grange: I smelt the rich scent of the heating spices; and admired the shining kitchen utensils, the polished clock, decked in holly, the silver mugs ranged on a tray ready to be filled with mulled ale for supper; and above all, the speckless purity of my particular care — the scoured and well-swept floor.

Like countless other Victorian women, Emily and her sisters would have been involved in the cooking, cleaning and general day to day running of the Haworth parsonage. This is their world. The loving, sensual description above betrays Nelly’s pride in her work: the smells, the sights, the tastes to come. Wuthering Heights may not be grand, but it is tended and cared for. Years later, the rot has set in.

Here the same house is seen through the eyes of a stranger, Mr Lockwood. Entering the sitting room he sees: ranks of immense pewter dishes, interspersed with silver jugs and tankards, towering row after row, in a vast oak dresser, to the very roof… Above the chimney were sundry villainous old guns, and a couple of horse pistols, and, by way of ornament, three gaudily painted canisters disposed along its ledge. The floor was of smooth, white stone: the chairs, high-backed, primitive structures, painted green: one or two heavy black ones lurking in the shade.

The details oppress, there is darkness and a militaristic feel to the language. The dishes are in ranks like an army: the oak dresser is heavy and towers up, one senses it could topple at any moment and crush the onlooker and, more ominously, there are villainous old guns and horse pistols; even the ornaments, the painted canisters, are gaudy, their colours violent. The chairs are primitive — like occupants — and finally, there are darker objects ‘lurking in the shade.’

Moving from description to characterisation, one of the comments made about the protagonist in both Emily Bronte’s Wuthering Heights and Charlotte Brontë’s Jane Eyre is that the characters are ‘flat’. It is true that Cathy and Heathcliff in Wuthering Heights do not seem especially reflective in the sense that they both have a tendency to act on impulses which are often unfathomable. For example, Catherine tells Nelly that she has accepted Edgar Linton’s proposal of marriage, and goes on to say: My love for Linton is like the foliage in the woods. Time will change it, I’m well aware, as winter changes the trees. My love for Heathcliff resembles the eternal rocks beneath — a source of little visible delight, but necessary. Nelly, I am Heathcliff — he’s always, always in my mind...

Heathcliff is equally tied to Cathy, who is ‘my soul’. Theirs is an overwhelming passion, one that brooks no separation. Even death cannot separate them. At the end of the novel when Heathcliff has followed Cathy to the grave, the pair of them retain the energy to haunt Penistone Crags. What can have been meant by referring to Cathy Earnshaw and Heathcliff as flat characters, when they storm so passionately across the moor, even in death? A glance at Charlotte Brontë’s Jane Eyre might give us a clue, for she too has been referred to as a flat character.

In Jane Eyre, Jane narrates her own story. Charlotte Brontë’s Jane is more of a thinker than Emily Brontë’s Cathy or Heathcliff and she often embellishes the narrative with the inner workings of her mind. Look at this interior monologue, where Jane derides herself for having entertained hopes that Edward Rochester might cherish a fondness for her: ‘You,’ I said, ‘a favourite with Mr Rochester? You gifted with the power of pleasing him? You of importance to him in any way? Go! your folly sickens me.

The monologue continues in similar vein and, by the end, neither the reader nor Jane herself is convinced that she has talked herself out of this infatuation with her employer. Jane is in love. Jane is obsessed. And while Mr Rochester’s governess reveals herself to be an intelligent and thoughtful woman, self-conscious in many ways that Cathy Earnshaw and Heathcliff are not, the main drive of the novel comes from her love for the mysterious Edward Rochester and her desire to be united with him.

It is the characters’ obsessive natures then, it is their single-mindedness, that has led to them being called flat. They are passionate, yes, but they have one-track minds which power relentlessly through the one-sided narratives, and make for compulsive reading. The characters are literary explosions bursting out from the minds of powerful novelists who on first publication dared not even reveal they were female.

Though Heathcliff is by far more the extreme character, Heathcliff and Rochester have much in common. They are both dark and saturnine, and both have shady secrets in their pasts. Indeed much of the attraction that Cathy and Jane feel for their respective loves is due to those secret aspects, to the lure of the unknown, the ‘Other’. In Victorian times sex was not a subject a middle class woman could write about openly, but both Wuthering Heights and Jane Eyre could be said to deal with sexual awakenings, and in those terms both Heathcliff and Rochester are very much ‘Other’. They are ‘demon lovers’, in the sense that both women accept them unquestioningly, whatever their past may have been.

In The Tenant of Wildfell Hall, Anne Brontë’s character, Helen Huntingdon, shows more awareness than either Cathy or Jane, and she is far less accepting. Sensible Helen leaves her brutish, drunken husband, thus turning her back on her particular demon lover. Helen is rewarded for her insight by finding happiness elsewhere. The Tenant of Wildfell Hall is more realistic and less extreme than Wuthering Heights or Jane Eyre, but what the novel gains in realism it loses in passion.

It is probably because of the passion they inspire that demon lovers, for all their shortcomings, have proved so enduring in fiction. Heathcliff and Rochester, despite their moral failings — Heathcliff is violent and abusive, Rochester is a philanderer and would- be bigamist — have provided many writers with templates for fictional characters. The dark, saturnine hero has become the cliché of romantic and gothic fiction, often linked with windswept landscapes and creepy houses that match his temperament.

For all that we are (theoretically) more enlightened today, demon lovers refuse to be confined to the 19th century. What about Max de Winter in Daphne du Maurier’s Rebecca? Today however, the role of the demon lover is less likely to be heroic, nor does the demon lover have to be male. Take a look at Margaret Atwood’s The Robber Bride. and what about Ruth Rendell’s The Bridesmaid?

The question for you as a writer is ‘does your local landscape contain a demon lover?’ Perhaps you have a pressure cooker of conflicts within you that you could use to create fiction that bubbles and seethes with true passion.

Orchids in the Princess of Wales Conservatory 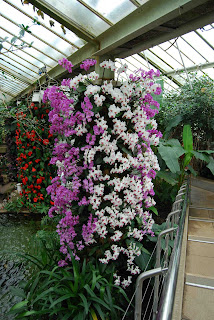 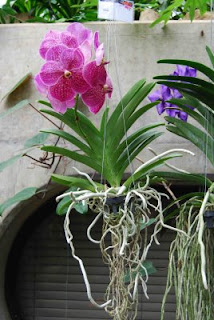 Resolution: to put pictures of Kew Gardens up on the blog each month. These orchids are part of the celebrations for 250 years of Kew Gardens.
Posted by Carol Townend at 09:40 No comments: Links to this post

Carol talking about His Captive Lady:

Guest Post on The Good, the Bad and the Unread

His Captive Lady was not a book I planned to write. I was about to start writing another novel (my current work in progress) when out of the blue the hero of His Captive Lady barged into my mind. Wulf told me in no uncertain terms that his story had to be told next! Wulf is a warrior and at times he is most persistent, this was one of those times. There was no escape for me, just as in the story there was no escape for Lady Erica. These alpha males, it doesn’t seem to matter whether they are living in the eleventh century or the twenty-first, they are pretty determined characters.

And that is one of the things I adore about writing medieval romance. It’s about people, people who are just like us. They have loves and hates and goals and ambitions. There are differences, of course. Eleventh century attitudes to sex were not the same as ours. How could they be? Birth control was practically non-existent, and there were strict ideas about morality and marriage. For a woman to have a child out of wedlock was thought most shocking.

Human beings being what they are - well, human - it did happen! Quite a lot. But it was increasingly frowned upon by the early Norman Church, and the children of unsanctified unions often bore the stigma for the rest of their lives. Illegitimate. Wulf was such a man, born on the wrong side of the blanket, he is set on overcoming his inauspicious background.

His Captive Lady is a stand-alone book, but it is also the third Wessex Wedding, which focuses on the early Anglo-Norman period. It was a turbulent time, with Norman incomers trying to grab as much land as possible, while Anglo-Saxons fought like demons to keep what had been theirs for generations.

All of which goes to explain how, when Seawulf Brader meets Lady Erica, romance is the last thing on his mind…

And here's another snippet about His Captive Lady from the Romance ebooks newsletter:
His Captive Lady opens in the freezing fens of East Anglia. Research is not all about places, objects can inspire too. Below is a picture of a bed taken on a research trip to the Anglo Saxon village that has been recreated at West Stowe. It is built into the corner of a thatched house and is very similar to the type of bed that Lady Erica in His Captive Lady might have slept in. When Erica spent the night at the inn with Wulf guarding her, her box-bed would have been smaller. 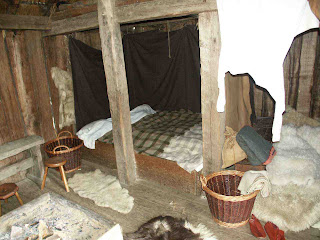 Posted by Carol Townend at 09:27 No comments: Links to this post