'Richard Armitage took 20% of the vote, more than double the count of any other male on the list,' said the RNA pollster. 'He was a clear winner from the off.'

The RNA is not alone in admiration of the actor, as numerous online RichardArmitage fan sites will testify. The ardency began with North and South,grew by leaps and bounds with the leather-clad baddie in Robin Hood, and shows no sign of diminishing as Spooks takes to the airwaves. 'It's a coup for Britain,' said one starstruck writer, 'not just for sexy Richard.'

Poll published courtesy of the RNA
Posted by Carol Townend at 02:37 2 comments: Links to this post

Benedict Silvester is a rogue and a flirt! His skill as a musician means he is always travelling…and he charms women wherever he goes. Yet he is on a special mission: to accompany Rozenn Kerber to England.
Rose is frustrated with Ben’s frivolous behaviour and annoyed that his wicked smile continually occupies her thoughts for he can never offer the stability she craves. But on their travels, Rose begins to suspect that he may have a serious side, that Ben is more than he appears…
Wessex Weddings
Norman and Saxons, conflict and desire

Excerpt
Ben had laid his lute across his knees. Opening his eyes wide - he was not looking at Lady Alis - he began to recite. ‘Once upon a time, King Mark…’
As Ben’s seductive voice filled the solar, conversations drew to a halt. Needles froze over the canvas. Heads turned in the direction of the fireplace, old heads as well as young. Rozenn pursed her lips. Was no-one proof to his charms?
Ben’s voice, she had to admit, was his chief asset, it had a way of reaching deep into your heart. At least, that was how it was for her, and given Ben’s success and popularity, she assumed others felt the same. Reaching for a length of sage green wool, Rozenn threaded a needle and shuffled closer to the table. Her stool leg squeaked.
Countess Muriel tutted.
‘My apologies,’ Rozenn mouthed, and bent over the canvas.
Yes, his voice was perfect. It was clear, it was carrying and it was somehow caressing. Like his fingers. A memory of the previous night flashed in on her, when she and Ben had been talking to each other with only her table between them. He had held her hand and his fingers had moved gently over hers. So gently. She could almost feel the warmth of his fingertips as she would feel them if he were to lift her hand to his lips. Later, he might lean forwards across the table and reach for her…he might slide his other hand round her neck, he might bring his lips to hers, he might…
Her needle ran into her finger and she gasped.
‘Rozenn, do be still,’ the Countess frowned. ‘And mind you don’t bleed on the canvas.’
Nodding an apology, Rozenn blinked at the welling blood and lifted her finger to her mouth. What was she about? Just because Ben’s voice had the power to seduce half of Brittany did not mean it had the power to seduce her.

Some notes on An Honourable Rogue:

What is An Honourable Rogue about?

An Honourable Rogue tells the story of Benedict Silvester and Rozenn Kerber, two friends who have known each other since childhood. It begins in Brittany in France in the summer of 1067 shortly after William of Normandy’s invasion of England. Politically, the duchy of Brittany is in chaos with rival counts jostling for supremacy and allegiances changing like lightning. What if William also attacks neighbouring Brittany? Ben and Rose get drawn into this maelstrom. Ben is a lute-player who carries out secret missions for the Duke of Brittany, one of which involves a journey to turbulent England. Knowing that Rose is ambitious, Ben arranges for her to receive a proposal of marriage from a knight in England and together they set off…

What inspired you to write An Honourable Rogue?

The ideas emerged from a holiday in Brittany. France is full of moated castles; there are towers with marvellous stories attached to them; and gothic cathedrals and tiny churches with magical springs bubbling up beside them. There are deep caverns and dark impenetrable forests and…you get the idea, France is a gift for any storyteller. It is almost impossible to take a step without stumbling over a new story. Here, for example, is a sketch my husband did of another inspiring place we came across. It is called Elven Towers and is in Brittany. (Fifteenth century). 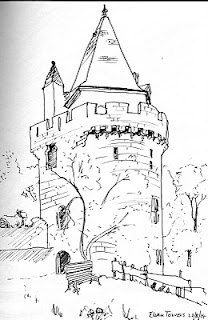 The day we visited Quimperlé, one of the key locations in An Honourable Rogue, we were only intending a quick visit. I was certainly not looking for another story as I had just had an idea for one about a Breton knight who comes over to England with Duke William at the time of the Norman Conquest. So we were definitely not on a story hunt that morning. We were staying in a small stone-built cottage nearby and needed some groceries for supper. Simple. The thought of a quick cup of coffee by the river seemed like a good idea…

How do you do your research?

This varies according to the stage of the novel I am working on. In the case of Ben and Rose’s story, the day we arrived at Quimperlé the characters were at first nowhere to be seen. The geography of the town was what intrigued, it lured me in, almost as though it was letting me know that there was a story here if only I could discover it! On the café side of the river, where we were sipping our coffees, the riverbank was low, but on the other side a great cliff reared up, houses were perched right on the edge. A few yards upstream there was a bridge. The air was filled with church bells and the screech of swifts and the chatter of house-martins. Before we knew it, we found ourselves exploring. There is an Abbey church in Quimperlé with an eleventh century crypt, and in the church there is a plan showing Quimperlé as it was thought to be in 1050. In 1050!

What attracts you to the medieval period?

How does a centipede know which leg to move next? Why do I particularly love bluebells and skylarks? It is a mystery. Of the 12 or so novels I've worked on seriously eight have been set in the 11th and 12th centuries - and they're the ones that have been published. Wherever I go - Winchester, Rochester, Carcasonne, Quimperlé I mentally strip away modern suburbs and factories and visit the medieval world. Life was brutal and short a thousand years ago and maybe that made passion more intense. Today’s world is complex. Home, work, medicine, technology, communication, computing, transport, anything electrical - so much of how it works is beyond any one person's understanding. Our average life expectancy is twice that of medieval people - yet we live in a desperate helter-skelter of a rush. My novels offer readers - and me - imaginary journeys into a simpler world that is closer to nature: where mills grind wheat into flour for bread; where the hands of smiths and saddlers, masons and carpenters made simple tools and equipment and buildings. In that world almost every face was familiar. Most food was locally grown and travel beyond the next hill was exotic. Physical strength in men was at a premium as they battled for power, lands and wealth. Fighting was bloody and face to face. Women could be enslaved, abused, used as pawns - but particularly if well-born, they could also wield power and influence.

How did you find your characters?

Naturally, it is not all about geography, although that was crucial with An Honourable Rogue. Books and libraries are a great resource, as is the internet. When we got back to the UK, I was able to find a document listing the counts of Quimplerlé. It mentioned their connections (and those of the Abbey church) with the Dukes of Brittany. I already knew about Brittany being a maelstrom of political intrigue, and once the ducal connection was discovered, it was a small step to imagine that my hero and heroine would in some way be drawn into it. In the case of An Honourable Rogue you might say that Ben and Rozenn’s characters emerged from a visit to Quimplerlé and some later research done from my desk in London. As mentioned, the hero of An Honourable Rogue is a lute-player. This modern lute is very like Ben’s, except that the pegboard of Ben’s (the bent back part where you tighten the strings) was carved in the shape of a leopard. Animal peg-boards were quite common in medieval times. Ben certainly captured my heart – I hope his music reaches you too! 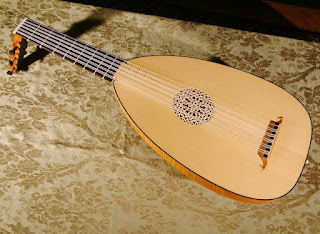 (Picture of Renaissance lute from Wikipedia)

Some pictures of modern-day Quimperle, in Brittany, the starting point for An Honourable Rogue: 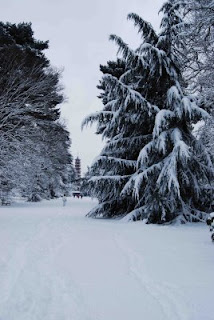 Posted by Carol Townend at 02:23 2 comments: Links to this post 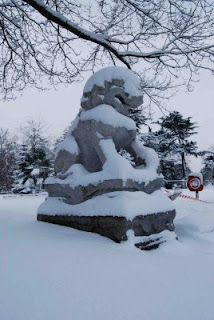 Posted by Carol Townend at 02:02 2 comments: Links to this post